My next guest is an author, screenwriter, playwright, producer and director. He is the CEO of Galahad Films and has written and/or produced an amazing 300+ films, commercials and documentaries.

Whilst he has made appearances in front of the camera, he is probably best known as one of the entertainment industry’s back stage icons. He has filmed across seventeen foreign countries and lived in five. He speaks four languages and describes himself as a Catholic-Zen Buddhist, a belief system, which he says would take about six hours and a couple of bottles of wine for him to explain.

Ladies and gentlemen, it is my honour and privilege to have been blogging with this modest and quick witted icon as he graced us with his presence on the pages of Simons 10 Q Interviews…

Of course, I speak of Robert Joseph Ahola, the CEO of Galahad Films…

But it’s not all about filming, Robert is an environmentalist and animal rights activist, and in his spare time, whilst not pursuing his passion for all things rugby, Robert has amassed author and/or co-authorship of fourteen published books including; The Silent Healer

, The Return of the Hummingbird Wizard

, and Delusion is Good

. He recently added a short tongue in cheek story Death By Helium

to the ever growing and non exhaustive list of publications.

Robert is also a Board Member of the Malibu Stage Company, a member of SAG/AFTRA and The Alliance of Los Angeles Playwrights (ALAP). During his career he has also won Three Clio Awards.

But since the launch of his website and blog, his self confessed obsession with privacy has been somewhat eroded, and he has slowly entered more frequently into the public eye in recent years, perhaps as a form of preparation, for the inevitable and pivotal role he is now faced with, as a star guest and interviewee in the upcoming Simons 10 Q Interview.

Yes, I am both delighted and humbled that Robert Joseph Ahola, the giant, amidst a gruelling working schedule consisting of a number of on going productions, has juggled his time to run the gauntlet and been blogging with me on Simons 10 Q Interviews.

SD Q1: You are the CEO of Galahad Films, but also an Author, Screenwriter, Playwright, Producer and Director and of course not forgetting your other passion, a Football Coach. Which role is your favourite and why?

RJA A1: It’s like asking which of my children I love the most. Since I love what I do, it’s a constant joy just to be spending my days pursuing all my passions. I supposed, if I had an edge it would be as a rugby (football) coach. That’s because I get to see some very fine young men become stronger in their world, their self-confidence, their sense of achievement and in their participation in what amounts to an international brotherhood. Rugby Football is more than a sport. It is the final test of character, humanity, courage and integrity. These young men get that, and they are better for it. I just hope I have had some positive influence in that discovery.

SD Q2: It is noted that you have worked/filmed across 17 countries during your career. Which was your favourite location, what was the project and what made it so memorable?

RJA A2: There have been so many. I think down under in Australia and New Zealand were exceptional. But my favorite probably had to be a TV series we did in France —Bon Jour Paris— in the early 1980s. So vital! Such a pace. We met everyone and covered every subject in that exquisite land. And French Tourism were so helpful and accommodating.

SD Q3: I have a double edged question regarding your love of English Rugby; Firstly, how did you come to learn the sport and what position do you prefer to play… and secondly, I read somewhere that your fellow players, when upset or trying to wreak revenge upon you, will often recant one or two ‘corny’ lines from previous movies at you. What is the most common line they use and from which movie does it hail?

RJA A3: Actually a correction on that. The rugby players I coach at Pepperdine have an initiation evening where they show all rookies one of the action adventure films in which I (invariably) starred as a lead villain. Their favorite is from a film where I play a German/Colombian drug kingpin: “…And tonight as we celebrate the Cocaine harvest…” usually gets a serious laugh followed by a round of applause.

SD Q4: You have achieved an incredible amount in your lifetime so far, is there anything missing that you would like to add to your portfolio of over 300 movies and commercials. If so, what would it be?

RJA A4: An Emmy, an Oscar and a Tony (for one of my prize-winning plays). But that might be wishful thinking. Truly I’d like to think my best and most creative years are ahead of me.

SD Q5: You agree to spend the rest of your days in the cutting room of a film studio where all things ‘editing’ are provided for you and you are not left wanting for food, water and somewhere to sleep. Films, commercials and TV series are regularly passed through a small hatch in the door for you to work your magic on, but you have no control over what type of work is forthcoming. Is there a specific film or series that you would hope to appear through the hatch and conversely, is there any series or film that you would dread working on and why?

RJA A5: There are so many. Right now, I’m working on a screenplay and video game of my fantasy novel, I, Dragon

. And I’m working on the sequel, entitled Beelzebub. (Both very spiritual allegories.) I also want to finish my Book Trilogy calledGalahad/A Cross in Time (where Merlin sends Sir Galahad on a time-travel into Nazi Germany to retrieve the Holy Grail), which I would like to make into a miniseries.

SD Q6: You wrote a very interesting piece for your blog last year regarding ‘political correctness’. It suggests that positive discrimination to minorities, in many forms, leads to negative discrimination against the masses. I have myself come across work related targets that enforce positive discrimination, leading to lesser qualified individuals being employed merely to satisfy PC targets. How does such an ultra PC regime fit in the movie world and does it cause difficulties whilst casting for parts in movies and commercials?

RJA A6: I think it’s time for one, and I’m working on a script that is a hybrid of an environmental terrorist film combined with a social assault on political correctness. It’s called The Attack of the Robot Bees. And though the title sounds B-Movie,Monsanto is currently sponsoring a Harvard experiment that is creating paper-clip sized bees to replace the tens of thousands of hives wiped out by pesticide spraying. I also did a 10 minute play inside my dark comedy, Scorekeeper. It is called “PC or DC” where you are electroshocked for making politically incorrect statements. So, Contestants literally have to be politically correct or they die. (Of course, everyone in the play does… Quite funny actually.)

SD Q7: You are an animal lover and support many animal rights organisations. Which animal do you consider to be most at risk at present, through which organisations do you channel your support and if there was one single cause you could champion what would it be?

RJA A7: We just wiped out the Black Rhino in November of 2013. That is a travesty! And so many more species are in constant danger. I have championed the causes of Dolphins and Elephants all over the world for years and will continue to do so. Gandhi once said: “Any civilization will be measured by the way it treats the lesser creatures of this world.” So far, we have failed miserably. And the UN does nothing.

SD Q8: If you were asked to label one piece of work or project as the ‘flagship’ of Robert Joseph Ahola, which would it be, whether writing, filming or something entirely different?

RJA A8: Writing in all media. I have good command over my other creative “titles.” But writing books, plays and screenplays are what I have to describe as “spiritual soul food.” And I truly feel in control of the game. I have, blessedly, never known writer’s block. There’s simply too much to say. And too much passion to do it.

SD Q9: You are currently in a relationship with an English Lady, yet your romances have not always been so sweet. I refer you to the difficulties you have encountered on multiple occasions with ‘Scorpios from Malibu’. Cheeky as it may seem, as you do refer to this publicly, can you expand on why ‘Scorpios from Malibu’ seem to represent your Achilles heel?

RJA A9: There’s a bit of irony there. But let me give you a little social insight. Everyone who lives in California and LA in particular knows the common joke that all women who come here are crazy. And Malibu women take “crazy” to a whole new level. I say that tongue in cheek of course. (I love most of them.) And yet, when asked, they would probably admit it themselves—that insidious combination of wealth, entitlement and abandoned trophy wives. Deadly.

Of course, in their defense I have to say that for every unbalanced woman there is some lying SOB out there who screwed her up. So take some responsibility guys!
Fortunately for me, I have found the love of my life, and though she is an actress and by job-description insecure, she is English, so she is grounded, elegant and spiritual. So I’m retired at last from the market.

SD Q10: Fed up with day to day life, the constant barrage of legislation and best practice guidelines that impinge upon your creativity, you decide to head off on a camping trip into the Nevada Desert and vow not to come back until you have put the worlds to rights in the form of a new volume of memoires. Food, water and writing instruments a plenty you have room to take three personal items with you for to remind you of all things good in the world. What three things would you take to keep you in high spirits and why?

RJA A10: First of all, not the Nevada Desert please! (Too many scorpions and snakes. And it’s bloody hot.) However, going up to my high hill somewhere along the Milford Walk in New Zealand…I would take a compass, Emerson’s Essays

…and of course a toothbrush

SD Comment: Robert, you have out foxed me on my last question, but as the question suggests you decide to disappear to write your memoires, it is only fitting that you would and should choose the destination for that task. However, I feel we might be pushing our luck taking four items instead of three, and therefore we’ll have to leave the last item behind. If it’s any consolation though, if you can find yourself a hedgehog on your travels I do believe their bristles make adequate toothpicks!

Seriously though, thank you so much for your time, I know you are incredibly busy and I wish you all the best on the road to your Oscar, Emmy or Tony award, or indeed perhaps all three! Many thanks.

This interview is taken from the book The Word available on Amazon.com 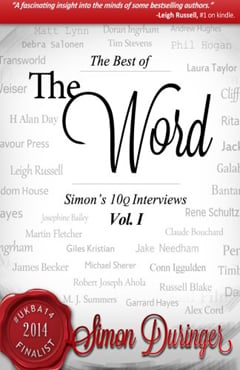 Interviewer Simon Duringer is an author and interviewer. His 5-star Amazon rated thriller Stray Bullet is also available at Amazon.com